Georgia is located at the crossroads of Europe and Asia, in particular, in the Caucasus. It is bordered by the Black Sea to the west, the Russian Federation to the north, Azerbaijan to the southeast, and Armenia and Turkey to the south. Georgia covers an area of 69,700 sq.m. and its population reaches 5 million.

The capital of Georgia is Tbilisi. Georgia is a united, parliamentary republic. The government is elected through democracy.

Georgia is a member of the Black Sea Economic Cooperation Organization, the Council of Europe, the Organization for Security and Co-operation in Europe, and aspires to join NATO and the European Union.

Many small kingdoms were established in this region during antiquity. The Kingdom of Colchis and the Kingdom of Iberia converted to Christianity in the early 4th century.

The Georgian alphabet was created in III century B.C. and is one of the 14 writing languages in the world.

The Kingdom of Georgia achieved political and economic strength during the reigns of David IV the Builder and King Tamar in the 11th and 12th centuries. There was a "golden age" in Georgia during the reign of Queen Tamar.

In the XVIII century, Eastern Georgia (Kingdom of Kartli-Kakheti) made a treaty with the Russian Empire and in 1801 was annexed by Russia.

After a short period of independence, Georgia was conquered by the Russian Red Army (1921) and became part of the Soviet Union.

Since 1991, Georgia would experiencing civil unrest and an economic downturn that would last for almost eleven years.

After the "Rose Revolution" took place in 2003, the new government introduced democratic and economic reforms.

Georgia - "Land of Georgians" - is he name of Kartli, one of the main historical-geographical regions of Georgia.

The European name of Georgia - "Georgia", comes from the medieval period and refers to the name of a saint - St. George, whose memory is traditionally highly respected in Georgia.

Citizens of Georgia are called - "kartvelebi", and the language - "kartuli". The root of this word - "kartvel" - means living in Kartli or Iberia (this fact is known in the documents of the Roman Empire).

The Greeks and Romans in ancient times referred to the population of the West - the Colchians, the East - the Iberians.

Territorially, Georgia is located between Russia and Turkey, on the border of Europe and Asia, on the eastern shore of the Black Sea.

According to some institutions, Georgia belongs to Eastern Europe, to others - to Europe and Asia.

Territorially, the state of Georgia stretches over 69,700 sq.km, 87% of which is occupied by mountains and semi-mountainous areas.

On the southern slopes of the Greater Caucasus, the naturally formed northern border connects Russia and Georgia through the Rikoti Tunnel.

To the south lay the Lesser Caucasus and the Armenian Plateau. Historically, western Georgia was called Colchis, and east - Iberia.

Due to its difficult geographical location, the Svaneti region is isolated from the rest of Georgia by the Caucasus Mountains to the north. 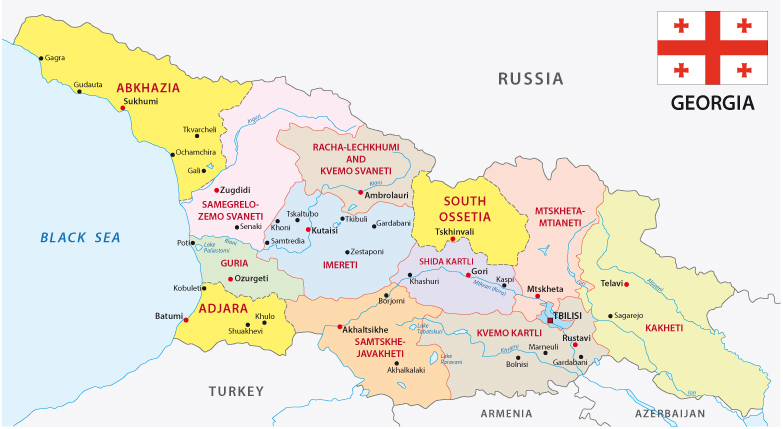 Between two large mountains lies the Colchis Plain. It is separated from the west with Kveda Kartli and Shida Kartli, from the north to the south - Likhi mountains. The highest peak in Georgia is Shkhara, its height is 5 068 m. The largest river in length - Mtkvari is 1,364 km long. Paravani is the largest lake and its area is 37.5 km. The deepest cave is Voronia (or Kruber). It is the deepest cave on earth to date (depth - 2197 meters). The Autonomous Republic of Abkhazia is located in the northwest. Southwest - Autonomous Republic of Adjara is situated. North is South Ossetia region. The population of the big cities of Georgia includes more than 100,000 inhabitants. Among them: Tbilisi - 1 473,551 inhabitants; Kutaisi - 200,611; Batumi - 190,405 and Rustavi - 122,900.

Georgia is a parliamentary republic. Presidential elections are held every 5 years. The Parliament holds the legislative power.